In Extinction Rebellion Australia we’re using Action Network (AN) to maintain our activists database. We’ve structured AN into a hierarchy of groups starting with a national group followed by state/territory groups and then local branch groups. This allows organisers the autonomy of managing their local group while also synchronising their activist records with state and national organisers.

This document outlines how to setup a new local group within Action Network.

Generally speaking the parent group will be the state group in which the local group resides. However there may be circumstances where it makes sense to setup an intermediary group. Work with local organisers to figure out what structure works best for their needs.

You can create a new group by clicking ACTIONS near START ORGANISING at the top of the page and then selecting the + icon near the ‘Groups’ icon. Fill in the required fields here.

Note that the current convention for group names is to prefix them with ‘XR’. If the group name is particularly long you may wish to set a shorter administrative title.

While you are here it’s also recommend that you turn on the following settings:

And populate the email/social media fields with the appropriate values.

It’s a good idea to create a new default email wrapper for the group. This will greatly reduce the Action Network footer at the bottom of their emails. Go to Details then Email Wrappers & Layouts, then click Add New Wrapper. Call the wrapper ‘Default wrapper’, leave everything else as is. Click Save. When you’re back at the Email Wrappers & Layouts screen, click the house icon next to the new wrapper to make it the default.

For Victorian groups, also create a sign-up form for the group as described here, and notify xrmelbintegration@protonmail.com so they can update their master list of local groups.

We’re now going to setup a query in the parent group to filter activists based on the postcode range. You can create a new query by selecting the + icon near ‘Queries’ in the ‘Actions’ dropdown in the ‘Start Organising’ menu.

The query should be called the local group name prefixed with 'Postcode '.

From here you will need to create rules to match the various post code ranges. You can do this using a filter of Field Value that includes the Zip Code matching a regular expression that describes a particular range. For this task you’ll only need to make use of:

In the example above we have three rules. Since we’ve using the OR operator only one of these rules has be to true for the activists to be included in our results.

Setting up Report based on query

The next step is to generate a report based on your query. This can be used to assist you in verifying the rules you created.

In the parent group create a new report with the local group name and a suffix of ‘- Postcode Check’. Select the query you just saved in the Queries field under the Includes column. At the bottom of the page check all of the Subscription Statuses except for ‘Unsubscribe’.

When selecting fields for the report only select the ones you need so in this case Email and Postcode. Download the report and look through the data to verify that your rules are working correctly. It’s quite possible that there are no activists from some postcodes. We’ll cover how to manually check these later.

We’re using ladders to automatically subscribe activists to local groups. If the sorting ladder for the parent group doesn’t exist then you’ll need to create it. If it does then you will need duplicate it and make the appropriate changes.

The recommend name for sorting ladders is:

Add Subscriber to local group (based on Postcode) V1

In the notes for the sorting ladder please describe the postcode ranges for each subgroup. This will assist other organisers in detecting whether there are errors in the rules.

The sorting ladder should start with a subscribe trigger. Following the trigger will be a series of chained decisions that determine if the activist is within the postcode range for a particular group. If the decision evaluates to

Decisions should be named as the subgroup with the suffix ’ Postcode?’. When creating the decision for the new local group you will need to duplicate the rules from the query. This means that if the post range changes in future you will need to update both the query and the ladder.

When you have made the changes to the ladder you can test them on our own account. Note you will need to manually edit your postcode in the activist section before running each test and unsubscribe yourself from the group afterwards.

Once the updates to the ladder have been made then save and activate the new ladder. If the ladder is a duplicate then you will need to close the previous ladder.

The sorting ladder will only handle cases of newly subscribed activists. To handle everyone who has previously subscribed you will need import them into the local group.

Return back to the reports section and edit the report you created earlier. You won’t need to make any changes here but by editing the report and stepping back through the settings you will force AN to pull in the latest data.

Once this is complete return to the local group dashboard. You should now see stats indicating that everyone has been successful imported.

Send an introductory email to the new group

Once the import is complete, help the group co-ordinators to send an email to the group explaining about the new group and welcoming them to it. Some suggested things to include:

Here is a sample email template you could use.

Now everything is setup. So please remove all the downloaded reports from your machine.

Thanks heaps for this guide Chris. I have a few things that I haven’t found answers to regarding adding other admins: 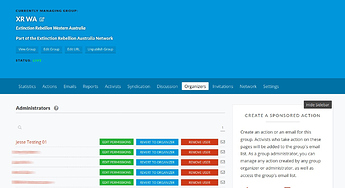 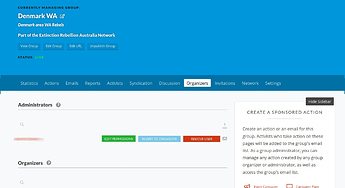 What permissions do they need for basic tasks. Please bear in mind that I don’t yet know what are basic tasks or what local admins generally need to be able to achieve. 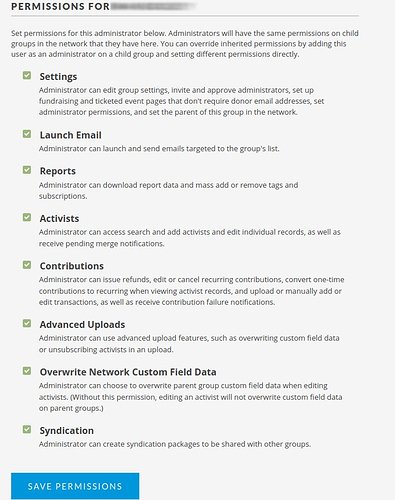 Given my limited knowledge of Action Network, when you say

Which of the above privileges are “basic organiser privileges” and what would constitute “bumping it up over time”?

I also need to know what are the basic required permissions to grant new local groups here. i.e. by clicking on the red “Permissions” button.

I’m not sure what best practice is but I think with a new local group if you give the admin organizer rights to the local group area, and take away “Overwrite Network Custom Field Data” permission but leave everything else, they should have all the powers they need to admin their local group’s Action Network without being able to destroy data for the state listing.

I think there may be some risks with leaving “Contributions” and “Advanced Uploads” checked but they are probably not that great, and at least they are limited to the local group listing only.

I can answer Jesse: add people as admins to the smallest area applicable, e.g. the local sub group based on council areas etc that they will be contacting directly - unless they are a state wide mobiliser/organiser who will then be onboarding more people to AN, etc.

(creating events is included automatically in admin rights , and is default with the lower access rights of being ‘an organiser’)

Settings allows the admin to add other admins for example - which is technically useful but from my experience on the Local group level local volunteer rebels with limited capacity often don’ t take up the full gamit of responsiblity and skill sharing with AN onboarding etc… I think that’s something dedicated AN support people need to do (that is, make sure a couple of people in each LG are skilled with AN to mititgate for power)

For new users Action Network can feel overwhelming so you can assign admins with the settings permission but then disable syndication, advanced uploads and contributions. That way Action Network will be slightly less overwhelming with admins will still be able to turn on advanced features as needed.