Ok here is a bootleg of the chapter on Recruitment from the awesome “Full Spectrum resistance” book which i really recommend you read. 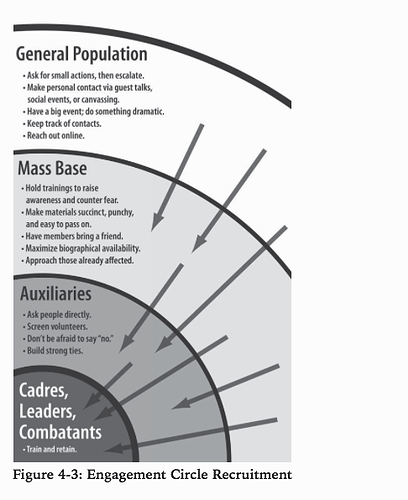 Below is a wiki-editable table with some Questions that I thought of after reading the chapter, and that I think we could answer together

Questions for XR in Australia to answer once you’ve read the excerpt above! (this is wiki-editable so you can edit this post!)

At the Grow the Movement session in Perth on Saturday @rosahicks @gerard ran, which was great,

A few people said that Parties/Social events were something they think would work to bring people IN to the movement.

Someone else also raised the point that, as they were the only one of their friends interested in this, they felt rather nervous coming along alone to an XR thing (in case everyone was radical crazies)… So they suggested the cute idea of …

Which I think sounds like a fun idea to trial somewhere

What’s the best way to do a buddy system ??

This had to do with both Buddies and Rebel Ringing.:
Last night at a QLD Outreach meeting I suggested that Rebel Ringing be split into two … Buddy Ringing. They call new people and develop pathways for greater involvement/training of new and existing Singups.
THe Rebel Ringer mostly tells people about an event on in their area - ie pretty tightly follows a script so it is easier to do. If they don’t get through they leave a message or send a set text about the event. When they encounter someone who wants to do more they offer a callback.
The Buddy Ringer steps in to develop a pathway for that person. Buddy ringers can also do section of the Database like if someone came to an action/event say 4 months ago and since then hasn’t even opened an email, they can ring to ask why, and send a more one-to-one approach in an email.
This is an attempt to make recruitment for Rebel Ringers easier perhaps as the job is less onerous unless they want to become a Buddy Ringer.