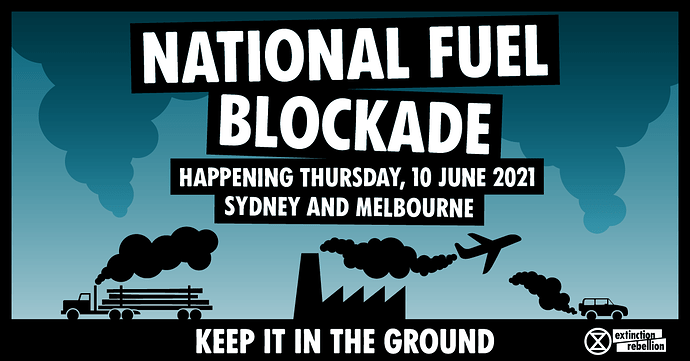 Extinction Rebellion will blockade liquid fuel distribution centres in Sydney and Melbourne on Thursday 10 June to highlight the short-sightedness and inadequacy of the Government’s gas-led recovery.

We will need as many rebels as we can get, from all across the country.

Please RSVP HERE TO JOIN THE ACTION AND RECEIVE UPDATES.

Sydney: Join us at Friendship Road Port Botany on June 10 at 4pm.

Melbourne : Join us at the Exxon Mobil Yarraville facility, Francis st, at 4:30pm for a prebrief.

Rebels Elsewhere : Roles will be available for rebels all across the country. RSVP and we will get in touch.

Fossil fuels such as oil, coal and gas are destroying the atmosphere and causing a Climate Emergency.

Our politicans are owned by the fossil fuel companies. They are spending our taxes to prop up world destroying technology such as new gas-fueled, power stations, pipelines and publicly subsidised oil refineries, at a time when the world desperately needs to cut greenhouse gas emissions and draw down all the excess carbon dioxide in the atmosphere.

Right now we have all the solutions we need to get to negative emissions.

Regenerative land use can restore fertility to the land while storing carbon in the ground. We can cut conspicuous consumption, and we even have the tech for a carbon free energy system: big battery storage, green hydrogen, pumped hydro, electronic vehicles, etc.

All we need is the political will to make them happen.

And that’s why Extinction Rebellion is building a powerful movement to use civil disobedience to disrupt business as usual and force the government to hold a citizen’s assembly of ordinary Australians to deal with the climate and ecological emergency.

Our government has a choice.

We are at a pivotal moment. What happens next is crucial.

RSVP HERE AND WE WILL GET IN TOUCH.

I held an Action Design Workshop for the fuel blockade on wednesday the 26th of May. I wasn’t aware at the time that the Sydney group were planning an intense series of meetings during the week. The aim of the workshop was to show how purposeful group work can bring an action design towards clarity, with sections on action goals, scenario planning, brainstorming the action parts that need to be organised and allocating people to work on them.

This workshop was a mental exercise to show how people might go through a brief process of goal-setting, brainstorming and planning to bring an action plan into greater clarity. This session was not a planning session for the action coming up.

My internet suddenly dropped out early in the session and was unable to reconnect for about 10 minutes. I had to reconnect via my phone on a 4g connection and unfortunately was unable to control the breakout rooms which was quite disruptive to the running of the workshop so we were unable to cover all that I had hoped to cover. The workshop was therefore somewhat rushed.

In a brief section on goals, rebels came up with three clusters of strategic goals for the action:

Rebels were divided into two small groups to discuss different scenarios for the action and how the action might be designed in these scenarios.

The rebels would have a small roadblock at or outside the fuel terminal driveway, with the bunnies blocking the trucks from moving onto the road.

The bunnies would include some non-threatening rebels, for example an old person with a walking stick. A baby doll in a pram might be present in the roadblock to emphasize the nonviolent disposition of the blockers.

A team of support rebels would aim to de-escalate the situation with the truckies, offering a case of beer and a chat beside the road. Perhaps there could be cake too.

The police liaison would do their job with the police, aiming to delay police and emphasize nonviolence.

This plan would be similar to the above plan. A priority was placed on not cooperating with police orders to move on, but to hold the space. Rebels would try to make use of their numbers to maintain the blockade as long as possible.

There were two main ways proposed that the blockade could be maintained.

The first was through the use of dispersion tactics. There could be a second line of the blockade, forcing the police to either split up into smaller groups or clear one blockade at a time. Non-arrestable rebels would work in groups to increase the disruptiveness of the blockade, with groups on bikes, rebels in cars, marchers or decoy blockades discussed.

The second way to maintain the blockade was through sheer force of numbers. It was suggested that a large number of rebels blocking the road would likely be difficult to clear in a hurry for police, and would also likely receive nothing more than a fine for participating, based on previous experience. It was suggested to emphasize this information in order to encourage large numbers of rebels to put themselves in the bunny position, so that police would struggle to remove the blockade.

We had a quick brainstorm of what was necessary for the action.

This section of the workshop was rushed because of the time lost to technical problems. My intention was to show that the various parts of the action that need to be organized could be divided up into parts. The purpose of each part, and important tasks to do, could be defined by the group. Each of these parts could then be taken up by a rebel or a small group of rebels to design and organize in detail. This would allow the various parts of the plan to be worked on in the time leading up to the action, while also providing a structure into which new volunteers could be added.

At the time of the workshop, around six rebels were interested to be bunnies in the roadblock. There was also a trio of rebels who were interested in organiing a livestream in cooperation with the Melbourne blockade. This showed gaps in organising the second line, the visual / artistic design for the action, social media and media plan beyond the livestream, staff liaison, etc.

This workshop was designed as an exercise to help improve action planning, and I hope it was of benefit to the rebels involved. What is shown above is not a plan for the fuel blockade that is coming up.

As a learning point for future action planning I’d encourage rebels planning a disruptive action to aim to go through a similar planning process many weeks before the action to allow further development of the plan, and more time for publicity to grow the action. I’d be interested to see how a fuel blockade goes where there is a plan 2 months before the action, and 2 months of snowballing promotion of the action to get hundreds of rebels involved in an action that the police may be unable to shut down.

Please let me know if you’d like to talk about this at all!

A very important point was missed in the planning. The scoping, recce, of the location.
The “small roadblock at or outside the fuel terminal driveway” is a major problem, because the Port area is a designated security area. Unauthorised accessed not allowed, fines of $1500 (starting level?) for just being there. So, no real green or orange component available. Also prohibitions on photography.

Careful choice of location based on sound reconnaissance and resultant planning is essential.

Roadblocking heavy vehicle traffic is a dangerous task. The Action Plan must include a"safety officer" in the planning, safety folks/experienced marshalls to ensure safety during the action.

The workshop was on May 26th. And concluded with “I’d be interested to see how a fuel blockade goes where there is a plan 2 months before the action, and 2 months of snowballing promotion of the action to get hundreds of rebels involved in an action”. But the action is just 2 weeks later on Jun 10th.

I think your 4 month lead up was far more realistic.

ADDITIONALLY:
The Action Design Workshop was on the 26th May.

And yet, the flyers, the RSVP etc had already been published, on this thread, MAy 20th… The details became locked in before any real planning, reconnaissance, role filling etc.

The workshop was my own initiative, to help some rebels work on their action planning skills. I’m not part of the Fuel Blockade action (I’m not even in Australia).

Looks excellent Max. Just pointing out two aspects I think were missing as far as this action was concerned (Reconnaissance, understanding the limitations and difficulties of the location - & Safety), and the arse about thing of issuing the publicity before the planning was done, and then leaving only 2 weeks between planning workshop and action, not the 2+2 months you suggested. Neither of which was in your court. Thanks for trying to get some structured thinking on the action.