Essentially the policy sets out a training pathway for people to gain the skills needed to effectively use Action Network and coordinate a local group. Vouching is accomplished through training and hosting XR events.

One size does not fit all, unless it’s a scarf.

P.S.
This policy does not include instructions for the Action Network Admin. These still need to be documented but it is hoped that those currently with admin access to Action Network are familiar enough with it to create subgroups and initially assign the Event Host as an Organiser not an admin at Step 2 and then after further training the Event Host can be made an Admin of the local subgroup.

As we use this policy in WA I’m sure we will discover issues with it and adjust it accordingly.

Hi @Pirate-Jesse,
I think this looks pretty good. As you know, here in NSW we are somewhat lacking in state-level structure, but we are trying to put together a WG that will, in part, act as a steward for NSW activist data. This group aims to work with AusMM mobilisers and existing Local Groups to get best use out of Action Network, as needed.

So, I think this policy looks pretty good for us to take on board and use. It would be interesting to know what other states think about it.

Hi @Pirate-Jesse . I’ve been experimenting with the Organiser role in Action Network recently and I think I can clarify a little about how the organiser role works.

An Organiser can create events but they can only email people who’ve RSVP’d if the organiser is listed as the creator of the event. This means that the organiser’s name would be shown on the event page (like shown here):

It is possible to create an event without a ‘creator’ (see here on Mattermost), but in that case, the organiser won’t be able to email RSVPers.

Step 2 of the draft access policy involves the event host being added as an Organiser. So the Action Network access policy as currently worded would either result in rebels’ details leaking outside XR, or else wouldn’t achieve the aim of untrusted event hosts being able to email people who’ve RSVPd to their events.

I think we can achieve what’s needed by adding the untrusted event host as an Administrator of the new Action Network group instead of an Organiser, but only with permission to send emails: 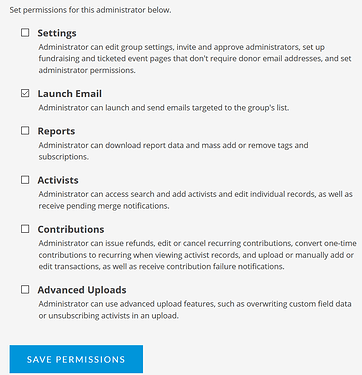 Actually they could email everyone in the new group’s list, but initially the only people in the lists will be people who’ve RSVPd to events so that wouldn’t make any difference.

After step 3, the event host could email everyone in the group, for instance with a regular newsletter or announcements about upcoming meetings, but wouldn’t be able to view rebels’ details until they had undergone AN training and been given higher permissions by the Action Network admin.

Here’s a suggested edit to the policy as per the above:
Step 2 point 2:
The Mobiliser can then train the Event Host and assist them to create an Action Network account, and add them as an administrator to the Action Network subgroup, but only with permission to launch emails. This gives the Event Host the ability to create events and send emails to those who RSVP to their events but does not give access to any other data or rebel’s details

Step 3 last point:
Note: Until this training has been completed the Local Group Coordinators/Tech Champion can still create events and send emails to those who have RSVP’d to their events or to the whole group list but can not administer rebel’s data or see those who have yet to RSVP.

This is great Amorph. Well done!

I want to talk about Action network admins:

In Vic there are currently 23 admins (no doubt of varying access) and 5 organisers. I doubt half of these are currently active. But the point I want to make is that there have been 0 mishaps with data being spread too far, or the AN being otherwise misused - as far as I can tell - given this many people have access and have had for months and months. On the contrary, this has allowed for decentralisation of power, and for things to undoubtedly flow a lot quicker than otherwise.

Currently it seems like there is a bottle neck in NSW with AN admins which is impeding the mobilisation effort. E.g. we have request to support groups starting in three areas of NSW that we haven’t been able to action because of lack of access to AN. We being @Vee and myself.

Does anyone know how many AN admins there are for NSW? I think only one- Hugh - as far as I know. I wonder if Vee and myself can be added as AN admins for NSW by the national AN admins - as there is currently no mandate to allocate such things within NSW and no one else experienced in AN to assist Hugh with this ?

I see this as basically a no-brainer with no risk involved - we both already have access to VIC, we are trusted, we currently live in NSW and are coordintating here. And more importantly - we are trying to mobilise the movement and get things happening.